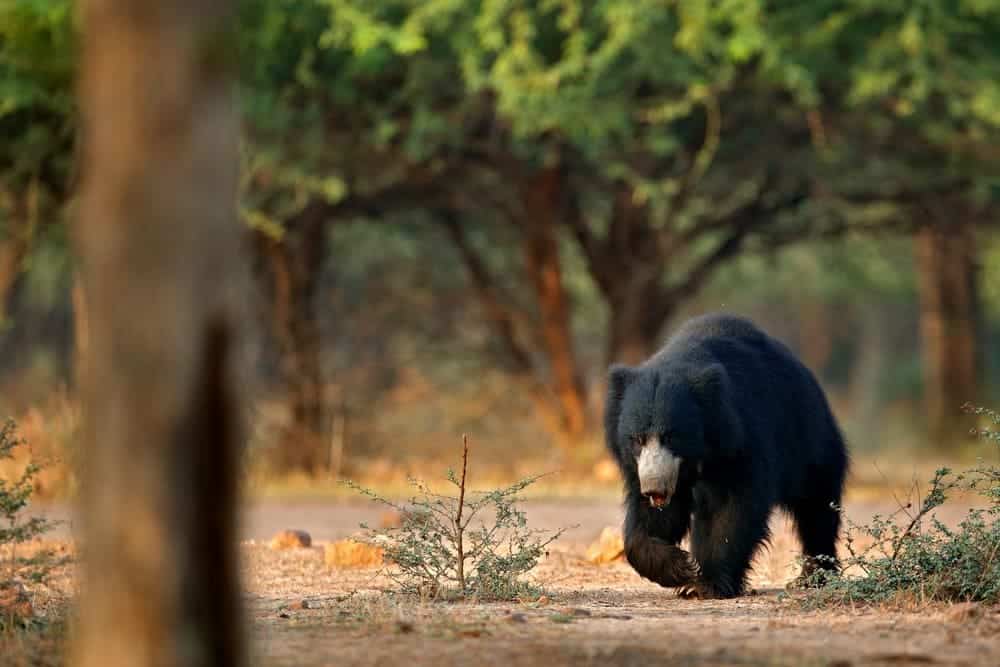 Watching the majestic bear in its natural habitat is a privilege for most travelers. India is the best place to see them in the wild – at various national parks as well as sanctuaries for their protection and rehabilitation.

When in India, be ready for a bear hug – literally. The country is known for its warmth, color and a wide variety of flora and fauna, especially in the wild. It’s a treat that travelers just cannot wait to experience.

Are There Bears In India? India is home to four species of this animal Brown Bear, Sloth Bear, Moon Bear and Sun Bear. The Sloth Bear is the most popular of the lot, made all the more memorable courtesy the character of the loveable Baloo in Rudyard Kipling’s ‘Jungle Book’.

Native to the country, this reclusive animal is a nocturnal creature that prefers hunting for termites, insects, fruits, and flowers using its long and curved claws.

These very fearsome claws are also displayed as a sign of aggression, which is usually when it is suddenly disturbed or feels threatened by humans and other large animals.

According to National Geographic, their fondness for honey often tempts sloth bears to knock down a honeycomb after scaling a tree, resulting in the nickname, honey bears (think the cuddly Winnie the Pooh).

Till recently, they were hunted for street performances – an image associated with many a Bollywood movie and India-based documentary – before the government banned this inhumane practice.

The rescued animals were sent to shelters like the Wildlife SOS Agra Bear Rescue Facility, which houses around 200 Sloth Bears liberated from dancing.

Visitors to this center can take a short tour to observe these animals and learn about their story in captivity, without interacting with them, as per the ethos of an ethical sanctuary.

Following the shrinkage of its natural habitat, sloth bears frequently ventured into forest-bordering villages in search of food. The resultant man-human conflict ended in unfortunate retaliatory killings of the animals.

Sanctuaries like Hampi’s Daroji Sloth Bear Sanctuary and Khangchendzonga National Park have helped rescue many of these animals and rehabilitate them in their natural environment.

The Sloth Bear’s closest cousin, the Himalayan Brown Bear, too, was hunted to the point of extinction. Once again, this was due to loss of the omnivore’s natural habitat because of the encroaching human population and poaching for its fur.

An arboreal omnivore, watching a Himalayan Brown Bear rest languidly on a tree after feeding on fruits and berries is a sight for sore eyes, since it is a rare one that one can encounter only in the autumn months.

Its reddish-brown thick fur is ideally suited for cooler climes and it usually prefers open valleys and pastures in higher altitudes of the Himalayas. During the winter months, they hibernate and are rarely sighted.

The International Union for Conservation of Nature has declared Himalayan Brown Bears as vulnerable, and listed them under the Indian Wildlife (Protection) Act of 1972, which means that offenses under these are prescribed the highest penalties.

Originally found in Himalayan foothills and north-east India, rampant hunting has resulted in the animals finding a home in conservation parks, like Uttarakhand’s Gangotri National Park.

Where are Bears Found in India?

The Asian Black Bear is another native from the Himalayas. They are also called Moon Bear because of a distinct crescent-shaped white patch on their chest.

These omnivorous bears, too, are classified as vulnerable as they are poached for their gall bladder and bile, which are used in traditional Eastern medicines. Is it any wonder then that this species is very aggressive towards humans?

In addition to poaching, the Moon Bear has lost its habitat to agriculture, forestry, forest fires, and human housing. This, in turn, has resulted in increasing conflict with humans.

However, travelers to Indian need not wait at villages for a marauding bear to catch sight of it. They can safely watch it places like the Uttarakhand’s Nanda Devi National Park.

And the chance of catching sight of one is highest during dawn or dusk when they are most active since this species of bear are crepuscular.

At night, the Moon Bears prefer to make itself comfortable on treetops, hollow tree trunks or caves. Incidentally, like the Himalayan Brown Bear, these species, too, hibernate during the winter months.

Interestingly, there is another bear species that sports a patch on its chest – except that this one is shaped like a bib and is golden in color like the rising sun. It is no wonder then that the breed is called the Malayan Sun Bear!

Found in Eastern India, these bears are slightly smaller than their counterparts but share the fondness for honey-like sloth bears. With their thickset build, small ears, short muzzle, and shiny black coat, they are also called ‘dog bears’.

Things to Bear in Mind

Bear-watching can be an enriching and fun experience, especially in places like the 83-km wide Daroji Sloth Bear Sanctuary, where a large population of free-ranging sloth bears are housed.

To increase the chances of spotting the animals, honey is smeared on the rocks to coincide with the arrival of visitors. Raised viewing platforms are set at a distance, from where visitors can see the animals without intrusion. However, don’t forget to carry a pair of binoculars to get a clear image.

Knowing the bear’s natural behavior – whether they are active nocturnally or in the early morning, or are they likely to be hibernating, etc. – helps in selecting a tour that will result in higher chances of spotting them.

Also, flash photography is not permitted in most national parks and sanctuaries since it can irritate the animals and make them aggressive or send them into hiding. Either way, the loss is for the traveler!

Most Indian national parks offer limited safaris that run during the day and a few for the night. Irrespective of which one is chosen, it is advisable to carry lots of water, sunscreen, wear sunglasses and keep the ringer on the mobile phone on silent.

Walking tours are also available, for instance at Madhya Pradesh’ Satpura National Safari, where guides will walk tourists through paths that where they are most likely to spot the animals, safely.

Many Indian national parks employ knowledgeable guides who can give great insight into bear activity along with real-life anecdotes and even help in observing the animals in a way that they are oblivious to human presence.

Explaining to them in advance about the expectations from the trip can go a long way in ensuring that one gets to see the majestic mammals in the wild in all their glory.

No one will argue how Paris is one of the most beautiful cities in the world. Being sought after by many tourists from different walks, there's no wonder why more than 30 million visitors are...